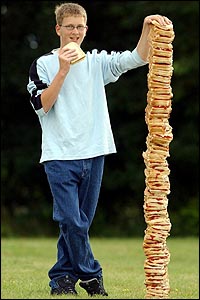 Craig Flagman is every nutritionist’s  nightmare – a fifteen-year-old who never eats anything except bread and jam, but, unbelievably, is perfectly healthy! Although, his diet contains hardly any protein and is 60% sugar, he is 1.84m tall, weighs 69 kg, and his parents say he has never been seriously ill apart from typical illnesses.

Craig, or ‘Jam boy,’ as his friends have nicknamed him, rejects any form of meat, fish, fresh fruit, or vegetables. The only time he doesn’t eat bread and jam is for breakfast, when he has chocolate cereal, and for tea, when he occasionally has a slice of chocolate cake. He also drinks two pints of semi-skimmed milk a day.

Craig’s strange diet started when he was four years old. As a baby he had refused to eat solid food, and rejected everything until his father gave him a sugar sandwich when he was nine months old. He also ate chocolate spread sandwiches, and this, with milk, was his diet until he was four when he asked to try jam, and started an eleven-year long obsession.

Craig sometimes craves some variety, but every time he tries something else he feels ill. Doctors believe that his condition may have been caused by choking on solid food when he was a baby. ‘They tell me I’ll grow out of it’, says Craig, ‘but I don’t know if I’ll ever change’. Although Craig’s parents eat a normal diet, their family meals are made more difficult by the fact that Craig’s sister Amy, 13, is a vegetarian. And every time they go out for a meal together, they have to phone in advance- to check they can bring jam sandwiches for Craig!