Q. How many bouncers does it take to throw someone down the stairs?
A. None! He fell.

What did the blonde say when she saw the YMCA sign??
LOOK!!! They spelled MACY’s wrong!!!!

A blonde’s house is on fire. She calls 911 and says, “My house is on
fire.” The dispatcher says, “Well, can you tell me how we get there?”
“Duhhhh, in the big red trucks, of course.”

Q: What do you call 10 blondes standing ear to ear?
A: A wind tunnel.

Q: What did the blonde customer say to the buxom waitress
(reading her name tag)?
A: “‘Debbie’. . . that’s cute. What did you name the other one?”

Bill Gates and the Lightbulb

Q: How many Bill Gates does it take to change a lightbulb?
A: One – he puts it in the socket and lets the world revolve around him. 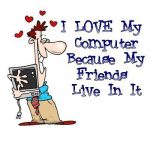 MACINTOSH stands for…
Most Applications Crash If Not The Operating System Hangs.
Microsoft 2000
Microsoft announced today that the official release date for the new operating system “Windows 2000” will be delayed until the second quarter of 1901.